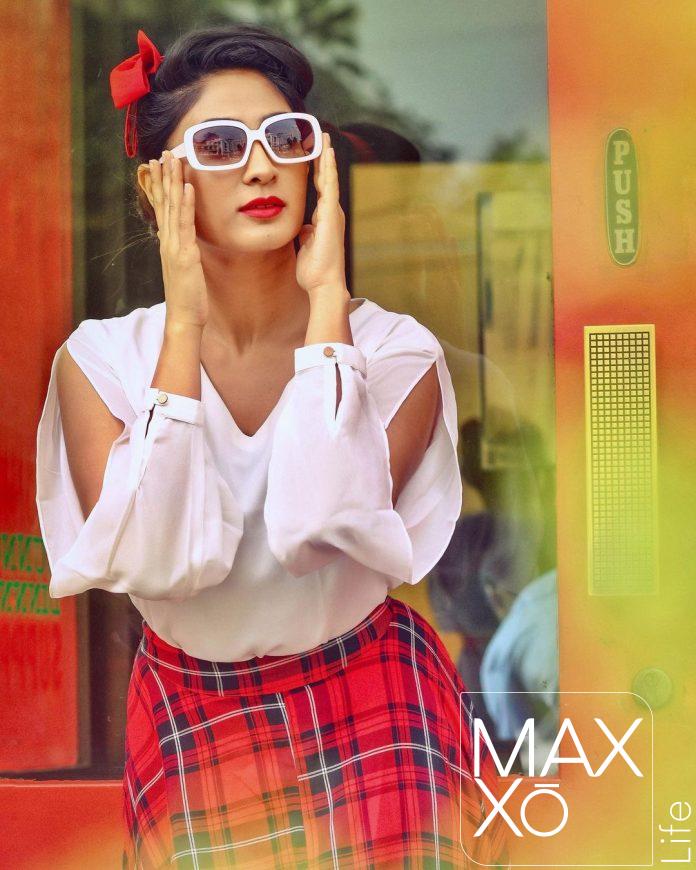 She has captured many hearts with the tomboyish character in her debut movie, Neena. It wasn’t a long struggle for this pretty lady to find a foothold here. From walking the ramp in beauty pageants, Deepti Sati has smoothly carved her way into cinema and she is definitely here to stay.

She is confident and optimistic by nature. Her versatile appearances from a short hair biker to a homely girl have helped her portray different looks and get into the skin of a character.

On the work front Deepti has massive projects lined up for 2020 and she is excited to share the screen space with Manju Warrier in Lalitham Sundaram.

I thank my stars for Neena. My journey post Neena has been very special. My life completely changed and Neena was a beautiful start to my career. I think when Neena happened it didn’t even hit me. I was lucky and I’m very grateful to Lal Jose sir for giving me this role. Even on the last day of the shoot I never realised that I have done something like Neena. I have officially started acting or I’m working with a big director like Lal Jose. Everything was so surreal to me. Sometimes it feels like a dream because Neena just happened all of a sudden to me. I’m happy for all the opportunities that have come my way so far… I just hope everyday that I get good projects, good roles to play so that I can show different shades of me as an actor.

My second movie was with Mammooka. I’m sure every actor has a checklist of people that they once in life want to share screen space with. He was one of the top priorities for me and I got an opportunity to act with him. So it is like a tick on my checklist and I have a long list of names in it. I sometimes feel like I have just started, I want to tick all the names and complete my list very soon!

And about him … Mammooka is a very chill person. I was very nervous on the first day I met him. Throughout the shoot there were many small things which I observed about him and imbibed in myself. For me every movie I have done is like a learning curve. Every project I work on and the kind of people I interact with, has taught me a lot of things. His sincerity, hardwork and dedication towards work, made me learn a lot of things about him and about life in general.

Umm… I remember Mammooka telling me about choosing movies as an actor –‘think about your character, think about the story, how it would relate to the audience and then make your choice …’

I think the work culture in the entire south industry is very professional. They finish work on time and they don’t delay things. Only the language is different and the process of film making is almost the same. No work can be done without a good teamwork. Teamwork is very important and here in south there is a spirit of good teamwork, so good movies are made. Apart from this I have noticed that the food is also different in all 4 states. The work culture, hardwork, dedication and teamwork is all the same.

I have always wanted to be an actor and I have been very passionate about my craft. So yes I do think working with big names is important. If the marketing point of view is considered, people notice you if you are doing a movie with a well known or famous actor and if the movie does well you get a good recognition. When I get a chance to work with these legendary stars, my dream is to be in the same space as they are because being in their presence itself teaches so much. I feel lucky about it… And I think working with such inspirational people would be an accomplishment for me or anybody for that matter. So for me working with such inspiring stars is a privilege.

Present project which has released is a Telugu series called SIN, for an online platform AhaVideo and is streaming online. It was released in April. Apart from that I’m doing Lalitham Sundaram, a Malayalam movie with Manju Warrier. I have completed only half of the shoot and had to wrap up because of COVID-19. Also a Hindi series which is on the tops, a Tamil movie called Naanum Single Thaan is yet to release and one in Telugu… everything is freezed for the moment because of the current scenario!

I really don’t know if the world deserved such a COVID break, but we had to realise our mistakes for taking the nature for granted. But I know one thing for sure our environment was showing signs that it was not in its best condition with the Amazon fire, many animals being extinct, so much of pollution etc. We have to respect our Mother Nature and give her back the love she deserves. This COVID break is actually a plus, atleast now people should realise the importance of our environment, MOTHER EARTH.

2020 has been a very weird year and completely unpredictable. The present scenario of life has taught me that we have to be mentally strong and live in the present, instead of thinking about the past or planning the future.

My quarantine has completely been with parents at home in Andheri, Mumbai. Since last year I was travelling a lot for work, the first month I spent by relaxing. Then next … since I’m a restless soul, I started practicing yoga and meditation on a regular basis. Apart from this I also dance to keep my soul happy. And I help Amma in the kitchen…

Well … it is just UNLOCK phase 1 now. But unfortunately we have been hearing a lot of stories that the curb has not yet decreased and cases are increasing every day also because people are not following the protocols and not even maintaining social distance. I totally understand that the government has started this UNLOCK because economy of the country is important and needs to be considered. But I think its our responsibility as the citizens of the country that we have to take this situation very seriously, we have to be more careful, thoughtful and mindful. We should also have some sort of civic sense in ourselves and towards everyone around us. Just be safe and abide by the rules because now everything is in our hands.

Yes I really think rape and domestic violence is a deadly humane virus. But it is not a virus that has emerged now during this lockdown. I’m sure it has increased quite a bit now but this has been the case even before we have been born.
Doing something against someone’s will … be it a man or a woman, it is a crime. God has given each of us a very beautiful life and we should have the freedom to do what we want to do. But sometimes people think that you can overpower the other individual and force them to do something which they are not ok with. Rape in general is a horrendous crime. There has to be a punishment that has to come out which should be so scary that the person doing it should think twice before having that thought in his head. This is my personal opinion. I don’t know how it would work out but rape is something which is never ok. Just the word rape has so much stigma around it that people are very scared to even talk about it in open. People should come forward and talk about such crimes, fight for a victim’s justice instead of letting the society embarrass them…

I did a recent web series in Telugu called SIN, a hard hitting story. It is a journey about a girl who gets married, faces marital rape and domestic abuse. Every girl gets married thinking that she would be loved in her life and gets a feeling of security with this very bond. But not every girl is lucky to have a home that is safe and secure. So I urge people to come out for help if anyone is going through such abuse or incase if you hear about something suspicious in your society… please go help them.
There’s a campaign called Bell Bajao Campaign. It urges local residents to take a stand against physical abuse, marital rape and domestic abuse. There is also a number to contact them (ring the bell) incase if you are a victim or you know someone facing it… please help them out.
People should talk about this domestic violence and such abuses even more because in our country there are women who don’t even know that they are being suspected to such abuses. So there must be more information and people should be educated about the same. It is a widespread topic and something that needs to be addressed immediately.

Well the entertainment industry is definitely affected quite a lot. Even for a small photoshoot it requires a lot of people and because of the present situation it is a tough time for a lot of people in the entertainment industry. Invention comes out of necessity so right now the situation is such that all of us have to figure out a way to go ahead in the safest and best possible way. Humans are meant to evolve and we will definitely make the best use of the present situation by following the guidelines in mind.

Due to the current scenario, I think the digital content and digital platform is the next thing for sometime till things get better. As of now this is the new normal. Life has to move on and entertainment is an irreplaceable part of our lives. We cannot deny that it has a huge importance in our lives. And people are eagerly looking forward to it. A lot of our films are made for the big screen but I think more content should now be made for the digital platform so people are still kept entertained. We should all go with the flow of life till the silver screens open up again and things are back to normal … Digital is the next thing!