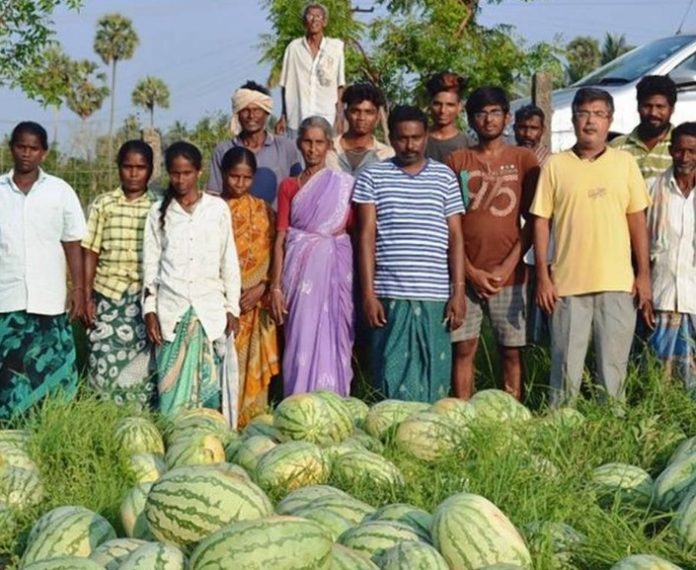 “The farmland in and around Cheyyur taluk, under Chengalpet district, has about 10,000 pieces of fruit, about 390 tonnes, all piled up with no takers due to the lockdown” says farmer Alladi Mahadevan, “All our farmers are incurring heavy losses.” Mahadevan, who has a 36-acre organic farm at Kalpakkam, near Chennai, is trying to help these farmers find customers by using social media.

“I am reaching out to huge apartment complexes in and around East Coast Road and Old Mahabalipuram Road, and using my transport take these watermelons to the residents, with police permission,” he says. So far, the response has been an enthusiastic one. “Such a support system is the need of the hour, or else these highly perishable commodities will go waste,” he adds.

Mahadevan explains how many farmers cultivate one or two acres of land around his farm, and how villagers in Pattambedu, Pavunjur, Koovathur and Malaarajakuppam and other regions which come under the taluk are the worst hit due the lockdown. These farmers usually get bulk orders from restaurant and fruit juice stall owners, as well as wholesale vegetable markets, “but with this sudden crash of logistics, they are left with no option but to sell to big players, who are using the situation to procure produce at a very low price,” says Mahadevan, adding that the farmers are being offered ₹2 to ₹3 per kilogram, for watermelons that are later sold at ₹18 per kilogram.

“Be it a large scale or small scale farmer, the cost involved in cultivating watermelon is ₹35,000 to ₹40,000 per acre,” says KR Jayaprakash Reddy, an agriculturist based at Kolathur Malacherry village. He adds, “We can harvest approximately 15 tonnes of watermelons per acre, and I have already harvested 16 acres. I still have another 20 acres ready to be harvested in about 10 days.” He adds that he normally sells his entire harvest to wholesalers from Kerala and Karnataka, who bring their trucks to collect the harvest. “Local buyers are ruthlessly quoting a price of ₹2,000 per tonne, while the usual price is ₹10,000. But as I did not want my produce to perish, I sold it for the price they asked,” Prakash says.

“If it was guava or mango, we could have pulped it and stored it, but watermelon is not a pulpy fruit and has a life of just 10 days,” states Prakash. “This is a lesson we farmers have learnt. Usually it is groundnuts that we should be harvesting around this time, but as it is labour intensive, we shifted to watermelon, which is a 60 to 70-day cash crop. But with groundnuts, I would not have incurred such a huge loss, as I can sun dry and preserve them for many months, then sell when I get the right price.”