Triveni Barman and Tushar Kalia have become husband and wife. The talented choreographer who took home the title of Khatron Ke Khiladi 12 winner informed his admirers of the news by sharing a lovely snapshot from the wedding. The newlyweds are shown in the picture beaming and wearing their wedding attire. Tushar chose an off-white sherwani for the auspicious event, while bride Triveni chose a lehenga in a contrasting hue of red.

The couple captioned the picture of themselves wearing bridal garlands and gazing intently into one other with “Blessed.” Celebs flocked to the comment area of Tushar’s photo as soon as he posted it, wishing him and Triveni well. The newlyweds received congratulations from Bharti Singh, Aalim Khan, Vivek Chachere, and Tarun Raj in the form of meaningful letters.

In May of last year, Tushar posted two lovely images with his then-fiancée Triveni to announce their engagement. He stated: “To fresh starts, @trivenibarman Send us your good wishes and love. #engaged “. When dressed in traditional yellow attire, the couple looked lovely. With a heart emoji, Triveni added the following statement to her social media profile: “You are the best thing that has ever happened to me.” Many of their admirers and friends, including the director Karan Johar, congratulated them.

Regarding Tushar’s professional background, he had taken part in the dancing reality show “Jhalak Dikhhla Jaa” and served as the stage director of “India’s Got Talent.” In Bollywood, he launched his choreography career with the film “Ae Dil Hai Mushkil.” The ‘Khatron Ke Khiladi 12’ champion is also recognised for choreographing movies like War, Half Girlfriend, and Ok Jaanu, among others. 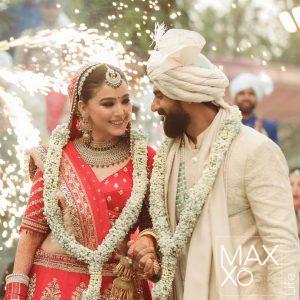