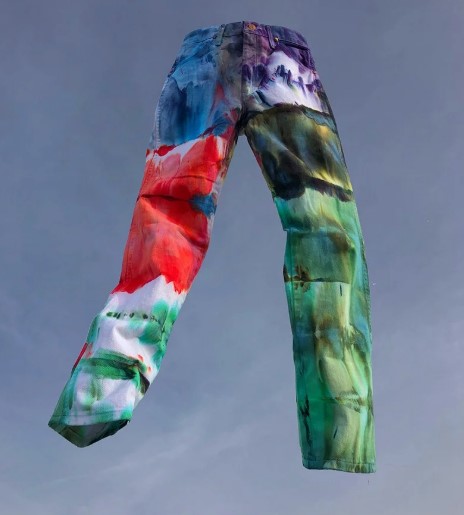 Tie-dye has long had a crunchy reputation. There’s that good ole fashion hippy-dippy kind, done in a bathtub with dyes from who knows where. There are also mass market T-shirts in swirls of clashing toxic greens and highlighter oranges. But lately, there has been a surge of elevated, artfully done tie-dye pieces. One artist churning out polished tie-dye creations is Zak Syroka. His standout pieces include pairs of distressed jeans that have been dunked, marinated, and wrung in tie-dye. Syroka, who does brand direction for a lighting designer by day, has been creating his handmade tie-dye creations for a little over a year now. At first, he had no plan to start his own brand—he just wanted to make pants for himself. “I made myself a pair and then everyone started asking me about them,” says Syroka. “Then, I started making my friends a pair here and there. It sort of spread and then I started making pairs for strangers.”

Syroka’s magnetic technique separates itself from the tie-dye pack. His pieces are typically color-blocked. His pants, created from pairs of white Wrangler jeans that, according to Syroka, “make everyone’s butt look amazing,” evoke a groovy stained-glass effect in hues of dandelion and aqua and poppy. Other pairs in oranges and yellows, purples and blues, are reminiscent of an almost hypnotic crushed glass method. The pieces are thoughtfully planned out and Syroka notes that it took him quite some time to get to this point. “Early on, I don’t think [the pants] were as good as they are now in terms of the colors I chose…looking back, they were actually really ugly,” he says. “I wasn’t thinking about color theory. I was just dyeing jeans but then I started to expand my palette and became obsessed with colors mixed together.” When asked about his process, Syroka is secretive and reveals only that he uses powder pigments. “[The process] really is something that I have been trying to perfect and that I am still trying to perfect,” he says. “I don’t like talking about it that much.”

While his jeans are one of the main draws to his designs, he has also done tank tops to fundraise for the presidential campaign of Bernie Sanders. “I thought money for Bernie was a good excuse to make tanks and sell them for really cheap,” says Syroka. But you won’t see a random T-shirt or sock in Syroka’s offerings: He is selective about what he chooses to tie-dye. “I don’t want to dye every garment every because first of all I think that most tie-dye is really ugly,” he says. That being said, he currently has no plans to develop a full fashion line but imagines that interiors could be in the future. “I want to do furniture really badly,” he says. “I can’t get the image of a sectional out of my head.” A tie-dyed sectional in the pattern of mesmerizing stained-glass? We’re on board. Until then, grab a pair of his one-off pants.