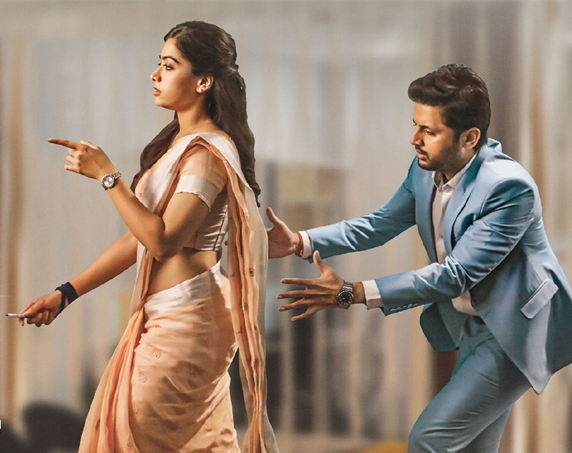 Rashmika Mandanna is one of the most sought after leading ladies in South Indian cinema having delivered back to back hits such as ‘Geetha Govindam’, ‘Sarileru Neekkevaru’ and ‘Bheeshma’. The pretty girl is also awaiting the release of her Tamil debut ‘Sultan’ directed by Bhagyaraj Kannan in which she is paired opposite Karthi.

Meanwhile Rashmika Mandanna’s new Kannada film ‘Pogaru’ was slated for release on April 24th but is postponed due to the coronavirus pandemic. The video of a song “Katabuu” from the film was released on April 2nd and has caused huge controversy due to the depiction of the hero abusing Rashmika’s character.

Apparently Dhruva Sarja the hero is a gangster and is using rowdyism tactics to force the heroine to love him. According to another actor Chetan Kumar there is pulling of hair, threatens to cut the girl’s throat and electrocute her as well and all without consent in the guise of romance. Netizens are also showing their displeasure to Rashmika for appearing passive in the song and agreeing to do such a misogynist fare.

Acts in a song where as 'romance', he pulls heroine's hair; threatens to electrocute & cut her throat; assaults women all w/ no consent

Alphonse Puthren’s “Gold,” reached the milestone of 50 crore in pre-release