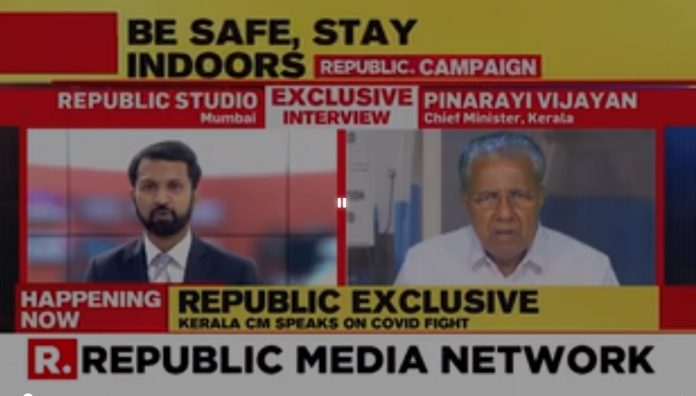 Amid surging Coronavirus cases in the country, Republic TV on Wednesday spoke to Kerala Chief Minister Pinarayi Vijayan, who has been appreciated for tackling the pandemic. Calling his state to be at the ‘forefront’ of India’s fight against the deadly virus, CM Vijayan explained how Kerala had set up strategies as early as in January. He stated that there is no community transmission of the disease in Kerala so far and that his government will soon begin mass-testing.

Speaking to Republic TV, CM Kerala said that the state has been alert about COVID-19 since the beginning. Explaining how the process went, he said: “On January 24th, a control room was set up in the directorate of health services, on January 25th, clear guidelines were issued to health officials and local governments on the measures to be adopted. By January 28, control rooms were set up in the districts as well. It was after all these initial preparations that 1st COVID 19 case was confirmed in India from Kerala by the Ministry of Health and Family Welfare on January 30th. Since then we have been quarantining people with travel history and testing those symptoms. We have been able to pin-point positive cases thus far.”

“We are moving towards conducting mass testing as prescribed by WHO to ascertain the spread of the virus. 80% positive cases that have been reported are those who have international travel history. Remaining are those who have maintained close contact with such people. There is no threat of community transmission in Kerala based on information so far. We are ready to meet any eventuality,” he added.

He also said that the efforts of the state have been appreciated by the Centre and that his state became a model for other state’s fight against Coronavirus. “We have been vigilant since the beginning. It needs to be noted the cabinet secretary appreciated the efforts of the Kerala health department. The fact that Kerala announced relief package before anybody else, and that Kerala announced lockdown before anybody else, brings it in the forefront of India’s fight against COVID.”

On Tuesday evening, CM Vijayan said that nine more have tested positive for coronavirus in the state, taking the total toll to 327, while 12 individuals have recovered. There have been 2 deaths in the state. Among the new cases, four cases have been reported from Kasargod, 3 from Kannur, 1 each from Kollam and Malappuram.The CM also said that among the new cases are four people who had returned from abroad, two attendees of Tablighi Jamaat event in Delhi and three persons were affected by contact. 1,46,686 individuals are currently under observation — 752 of them in hospitals and the rest in homes. Meanwhile, the total number of active COVID-19 cases in India has climbed to 4643, as per the data provided by the Ministry of Health and Family Welfare.

Kerala is right in the forefront of India's fight against Covid-19: Chief Minister Pinarayi Vijayan to Republic. Tune in to watch #LIVE here – https://t.co/RZHKU3wOei pic.twitter.com/M25DKyiZCw