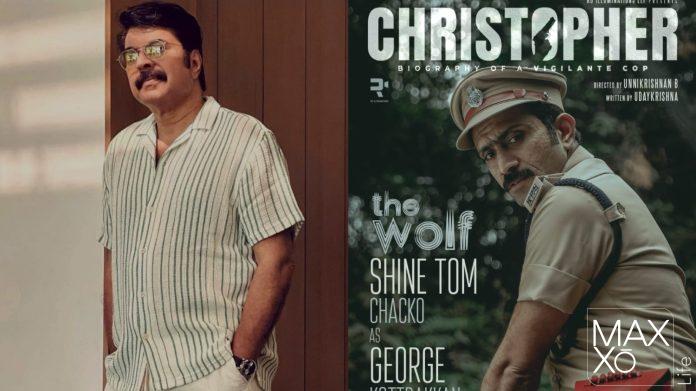 The character poster for the upcoming movie Christopher, directed by B. Unnikrishnan and starring Mammootty, has been released. The poster for George Kottrakkan, who has been played by Shine Tom Chacko, has been released. In the poster, Shine Kathapatra can be seen posing as a police officer with a gun. Shine will likely have a negative outlook, according to the poster. Christopher is produced by RD Illuminations and has the tagline “Biography of a Vigilant Cop.” Sneha, Amala Paul, and Aishwarya Lakshmi are the three heroines of the film. South Indian actor Vinay Rai also plays an important role in the film.
Christopher also has the distinction of being a film directed by B. Unnikrishnan with a screenplay by Udayakrishna after Aarat movie. Along with Dileesh Pothan, Siddique, Jinu Abraham, Vineeta Kosi, Vasanthi, and 35 other new faces, are all playing roles in the film. Mammootty will play the role of a police officer. The cinematography of the film is done by Faiz Siddique, who directed the movie Operation Jawa.
Music: Justin Varghese, Editing: Manoj, Production Controller: Aroma Mohan, Art Direction: Shaji Naduvil, Costume Design: Praveen Verma, Makeup: Jitesh Poiya, Action Choreography: Supreme Sundar, Chief Associate: Sujith Suresh, PRO: P Sivaprasad, Niyas Naushad, Marketing: Obscura Entertainments, Stills: Naveen Murali and Design: Collins Leophile are other crew members of the film.